We’ve noticed a lot of TFT tournaments popping up lately, and decided to put together a monthly post to keep track of them all. If you know of a major tournament that we forgot to list here, let us know! Hopefully this post gets longer and longer each month; when new tournaments start, everyone wins.

This Saturday and Sunday, Common.gg is hosting a PBE Tournament with a prize pool including $400 and 8 sets of Agon.GG slippers. Although the tournament is already full, it should be fun to watch Challenger level players like GrandVice8, Treebeard, FluffyHS and Kurumx play in a competitive setting so early in the life of set 4.5. I expect a lot of frustration from players; PBE is pretty unbalanced right now and everyone is still trying to find the new meta. PBE patches are pushed through on Tuesdays and Wednesdays, so players will only have a couple of days to practice before the fun starts. Find additional information on the tournament here, and be sure to catch some this weekend. 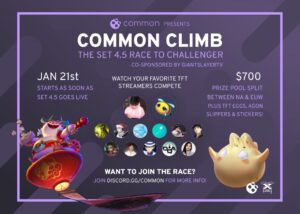 Common.GG and GiantSlayerTV have teamed up to co-sponsor the Set 4.5 Race to Challenger. The contest begins as soon as 4.5 goes live on January 21st, and contains a ton of big name contestants. Challenger players in this contest include k3Soju, TSMSouless, Treebeard, Robinsongz, FluffyHS, Rayditz, AsianGamer5, AgonTFT, KitingIsHard and more! TFT Product Lead TJ “RiotGreenTeej” will also be participating and has pledged his winnings to charity. The prize pool includes $700, TFT Eggs, Agon.GG slippers and Agon.GG stickers.

Last week Rayditz put together a duo’s tournament sponsored by @esportslaw. The prize pool was a whopping $1,400, and they expect to repeat this tournament biweekly. Unfortunately, Set 4.5 launches on the 21st and they decided to wait one additional week to host the next edition. Be on the lookout for additional information from /u/RayditzFN on /r/competitivetft.

By Matt Smith // 6 months ago
News