6 Skirmisher Jax build is the most fun build I have played in Set 5. The end game team is tanky and has the damage to break through most other comps with ease. Jax rips through the opposing team while Mordekaiser soaks up damage. I first saw Mortdog play Jax during PBE and I instantly fell in love (with Jax… I already loved Mort.)

This build has one weakness; 6 Knight Kayle. Unfortunately the 6 Skirmisher Jax build focuses on consistent recurring damage, and the 6 Knight buff blocks the first 90 damage on each auto attack. I have played a few “perfect” games with this build, only to get 2nd against Kayle. We’ll see if both builds stay in the meta for long after next patch.

Although the most important item in this build is Bloodthirster (non-shadow version), I like to start with a bow off the carousel. Runnan’s Hurricane (shadow or regular) and RFC are both great and the bow can go on multiple units early game. Warwick, Vayne, and Thresh make a great Forgotten start. Although these units can be tough to find, they are the best start. Chip in a Nautilus or Gragas to complete your front line. Instead, use Varus if you need more damage and you already slammed BT on Vayne. I also like Kha Zix (and eventually Nocturne) as an item holder. Kled works great too. 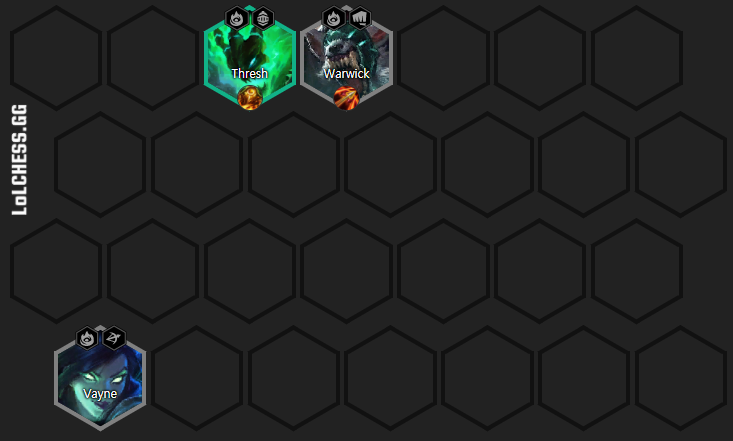 My mid-game revolves around Skirmishers. Kennen and Trundle are the 2 cost Skirmishers. Nidalee, Pantheon, and Lee Sin are 3 costs. I collect all of these units while I’m level 5 and level 6. They are not the strongest units and my mid-game may suffer, but I’ll have a better carousel position either way. I play Trundle and Pantheon for 2 Dragonslayer if possible, and I throw a Morello’s on Kennen if I’m bleeding too much at this stage. I’m never afraid to slam locket either; it’s perfect for late game positioning. 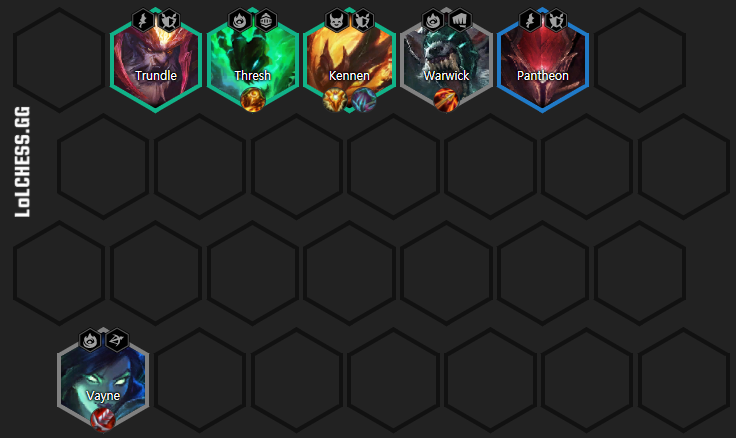 Jax and Mordekaiser are essential to pivot my board from mediocre/weak to strong, and missing them on my level 7 or level 8 rolldown means certain death. My end game board consists of 6 Skirmishers, 4 Dragonslayers, 2 Assasins, and 2 Nightbringers. Shadow QSS is the BIS defensive item for Jax, but Shadow Trap Claw flies under the radar and can also work. Mordekaiser and Viego play the pivotal role of secondary carry. I build Morde with almost pure tank items, but I would consider giving him JG if I know I’ll face a Kayle build for the win. Diana gives me fantastic utility and CC because her ult pulls enemy carries off the back line. Lee Sin is mediocre at this point and Kennen is a trait bot unless I have Morello’s. Without Morello’s, I flip Kennen out for Nidalee. Pantheon is great for holding aura items like Locket or Zeke’s, but giving him both really limits my options for positioning Jax. 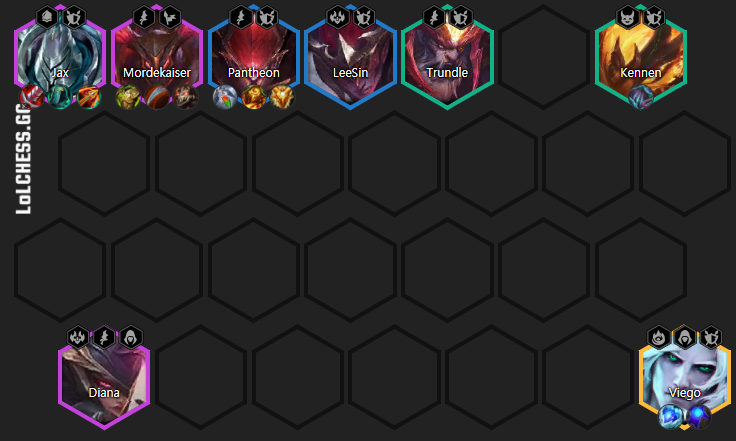 It’s easy to get my ducks in a row when positioning this build. All my Skirmishers (sans Viego) go up front, regardless of whether or not you have Locket. I position Viego and Diana to jump to the enemy carry. If there are still 4 to 6 opponents alive I may split them up to ensure at least one of my Assasins hits the target.