An exciting new class is arriving with Set 4.5: Slayer. This class contains some old favorites but also some new faces. The Slayer buff seems scary and is likely to turn some strong champions into all-out hypercarries. It activates with 3/6 Slayers on the board: 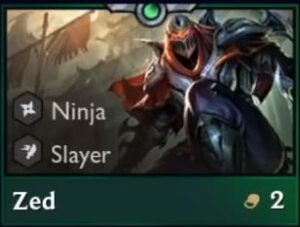 Zed loses the Shade class for set 4.5, but keeps his teleportation to the back line (it’s been added to his unit description, so he’ll jump even though he’s not an assassin.) His transition into the Slayer class feels almost natural; he’s been a potential hypercarry in set 3, 3.5, and 4. Why not set 4.5 too? 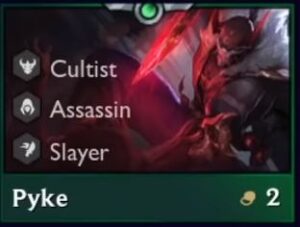 “Pyke leaves a phantom at his location, then dashes behind the farthest enemy. After 1 second, his phantom returns to Pyke, dealing magic damage to all enemies it passes through and stunning them for a few seconds.”

Pyke’s addition to the Slayer class is a bit of a mystery to me; his biggest strength is his stun and he isn’t known to do much damage, even to the backline. Could this move change his role? Or is he purely a “trait bot”? 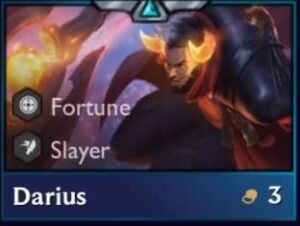 Due to his unstoppable nature, QSS is a lot less useful on Darius compared to Set 3 & 3.5. The damage reduction on each successive dunk is also a very noteworthy change from Set 3 & 3.5, and should balance out the unstoppable buff. Ex: Dunk #1 does 1000 damage, dunk #2 does 800 damage, dunk #3 does 640 damage…until he fails to kill a unit with his dunk. 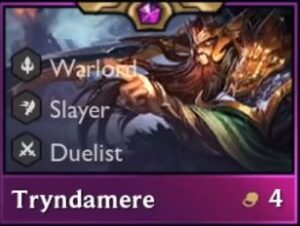 “Tryndamere spins towards the most enemies in a line dealing 100% of his AD to enemies in his path and empowering his next three autos to do (75/100/200%) additional damage.”

Tryndamere will do tons of damage and game designers compared him to a melee version of Draven when itemized well. Infinity Edge and QSS will probably be 2 BIS items for him. 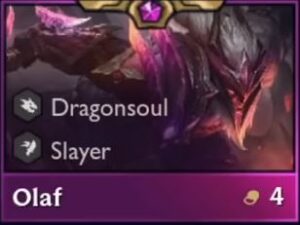 As I mentioned in TFT Festival of Beasts: New Dragonsoul champs and trait, Olaf is designed to be the perfect carry in a Dragonsoul build; he’s got high base health and an attack speed boost in his kit. That being said, he’s still a strong unit without Dragonsoul and will really shred through a team with the bonus damage from the slayer buff, his ult, and a deathblade for good measure. 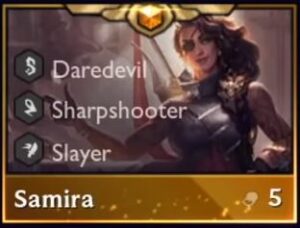 Since Samira is the only Daredevil in the game, it’s worth noting what that means: “Daredevils seek the thrill of battle, dashing after every other attack. After every dash, they shield themselves for 20% of their max health and their next attack fires 2 shots, gaining Style. At max Style, they cast their spell.”

So Samira does not use mana, which means any tear-based items are less effective on her. Instead, you’ll want to stack attack speed items like RFC or Rageblade on her. Keep in mind: once she gains enough “Style”, her ult fires 24 shots which bounce if you have sharpshooter buff online.

Samira being the only ranged Slayer makes her extremely dangerous and tough to balance; she’s got the bonus damage and Lifesteal without the frontline positioning. During the first few days of PBE she was far too strong and Lead Designer Mortdog had a little fun with a facetious tweet:

Getting a lot of messages about Samira right now. Don't worry we're aware. She'll get buffs in tomorrows build.