6 Slayer Tryndamere builds are overtuned and overpowered in patch 11.4 according to Rayditz, a former NA rank 1 and current Challenger level player.

Tryndamere was buffed in patch 11.4 (aka Set 4.75) and is now the #1 carry for the 6 slayer build. Trynd started set 4.5 with a lot of hype but a ton of underperformance. Players worked to itemize him, only for him to fail them as a late game carry. Riot dug deep and rooted out the problem; his spinning dash was slow, causing him to be CC’d easily. In addition to the adjustment to his starting mana, Riot sped up his dash speed and increased the range of his ult targeting. Now he’s more likely to jump on the enemy backline and tear apart the enemy carry.

Best in slot (BIS) items for Tryndamere are Deathblade, Runnan’s Hurricane, and QSS. You can also use Infinity Edge or Hand of Justice for damage, but QSS is a must-have. Look for Tristana with sharpshooter buff, Wukong with Divine buff, or Yasuo with Duelist buff during stages 1 and 2 to carry your Tryndamere items. Aura items like Zeke’s Herald, Chalice of Power, and Locket of the Iron Solari are extremely flexible and can be used for an early game boost also.

The ideal mid-game carry is Shyvana; if you luck into a few of them during stage 3 and 4 you can consider pivoting to a brawler build for late game. If not, she fits nicely alongside Olaf and Braum to add Dragonsoul to your team temporarily. Kalista works as a mid game carry as well. She can be run with cultists – Pyke will remain on your team until the end of the game. Zed is another decent item carrier. He can help get the 3 slayer buff online early and but isn’t necessary for the end game as long as you have a slayer chosen.

Once you hit level 7 and 8 you should be searching for Tryndameres. Selling your chosen and rolling down at 8 is a popular choice; you may even luck into a chosen Slayer Tryndamere. You may have a tough time finding all the 5 cost units needed for this build, so plug in Aatrox for Ornn, Zed for Samira, and Jax for Lee Sin as temporary placeholders. Your end game team should look like this: 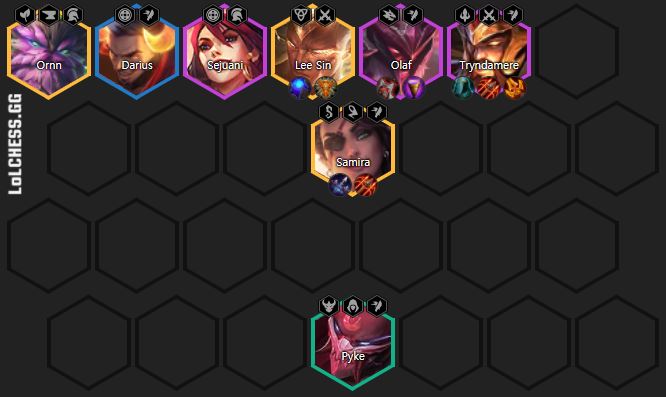 Samira isn’t especially strong without Sharpshooter buff, so leave her items for last. If you are strong enough to get to level 9, throw in a sharpshooter like Sivir to add the sharpshooter buff. Position her near Trynd and Olaf so they get the benefit of extra attack speed after she ults.

Almost all the units in this build are melee so your front line will be full. Aura items are the most important factors for positioning; make sure Trynd is benefitting from as many as possible.

Don’t position Samira too far back; her range was nerfed and she’ll take useless time walking forwards when she could be auto-attacking and gaining Style for her ult.

Is the Slayer Tryndamere build the next thing to be nerfed? We’ll have to see what patch 11.5 brings.