I flipped on the Challenger Series last week and was greeted by an advertisement for Fantasy TFT. “TFT Stock Market”, “FantasyTFT.com“, and “1,000 Eggs up for Grabs” filled the screen between matches while the eSports version of elevator music droned in the background. I’m a finance lover and TFT fan, but also a skeptic. I signed up expecting to be disappointed, but was surprised that the platform was clean, functional, and fun. 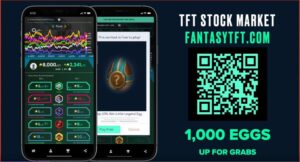 I joined a competition for free and quickly learned that each Fantasy TFT player starts out owning 100 “shares” of each of the 8 competitors. I also began the contest with a fixed amount of cash in the bank. Share prices ticked up and down as other players bought and sold second by second. The in-game interface was straightforward: click one button to buy shares, and another to sell. Line graphs take up the majority of the screen and display the price of each competitor over time; the promised TFT Stock Market. Unfortunately for Melvin Capital and Citadel, shorting is not allowed.

Shares bounced around in-line with the results of the live match and my P&L accelerated into the red. I ended the game with over $16,000 in losses and finished 110th out of 141. A complete disaster.

Afterwards, I found the “P&L Worksheet”. It provides data on the contest and tracked my transactions. Looking back, I made 34 trades over the course of 45 minutes. I was clearly engaged in the match being streamed and the Fantasy TFT game, even if I ended with atrocious performance. 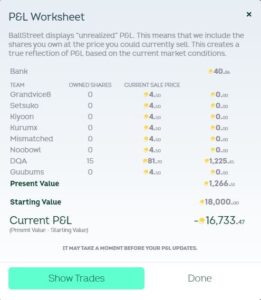 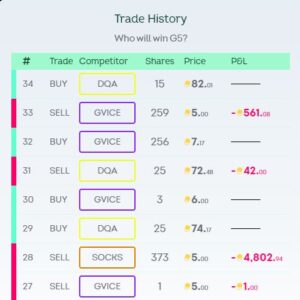 I tried again the following day with more success; I placed 28th out of 388 in a contest. Good enough for a free Little Legends Egg. Once again I was skeptical that BallStreet would pull through, and once again I was surprised. I received a polite email a couple of days later with the free code.

Overall, the experience was fun and I will definitely play again. The main menu could use some polish, but most features are simple and easy to use. The platform feels tailor made for TFT and it definitely increases user engagement. This is a great partnership by the TFT team and I expect Fantasy TFT will become a mainstay for fans.

By Matt Smith // 6 months ago
News