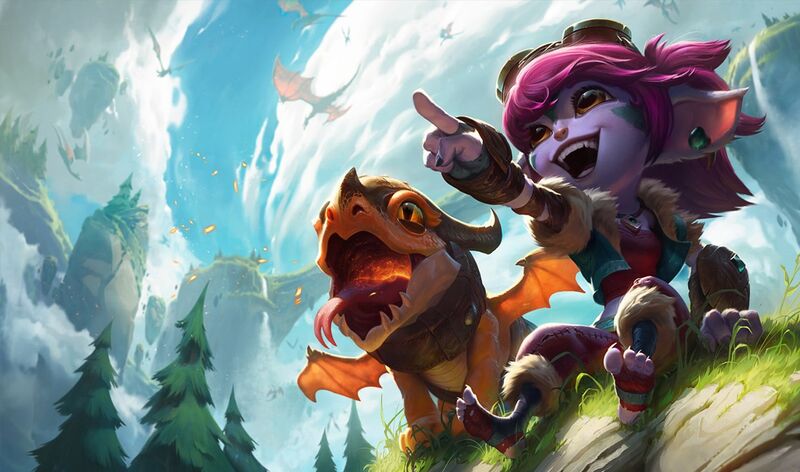 Agon made a huge splash in the North American regional qualifiers by making it all the way to the final 8 players. Throughout the tournament he forced one build: Reroll Tristana. This build centers around finding a 3 star Tristana and surrounding her with Spirit and Sharpshooter units. 3 star Teemo is also encouraged.

Play this build with a Spirit or Sharpshooter chosen, but not Nidalee. Tristana, Diana, and Teemo are high priority chosens in the early game. Don’t fret if you can’t find one; you can luck into a Yuumi, Kindred, or Sivir during mid-game.

Counter to most logic, the most important items in the reroll Tristana build are Lockets of the Iron Solari. Focus on grabbing chain vests and rods off carousel, with gloves, swords, and belts as secondary options. Slam lockets early to preserve health. Consider Zeke’s Herald and Chalice of Power to buff your sharpshooters. Tristana is your carry but doesn’t require many items. QSS and Last Whisper are best, but she can also use Rageblade or Hand of Justice. This build is different from all others from beginning to end; embrace it.

Early game is where this build comes together. Most reroll builds (like Nasus or Bonkey Kong) advise “slow rolling”. They work best by saving your gold to roll above 50. This build requires 3 star Tristana (hence: Reroll Tristana) and 3 star Diana, so do NOT level up until you find them. Its common to lose hard early while upgrading your units, so don’t panic if you’re in last place. If you’re contested in this build, you’re both going to hold hands to 7th and 8th place. If  no one else is running this build but you’re still struggling to find the units, roll down to 30 gold once you’re above 50. 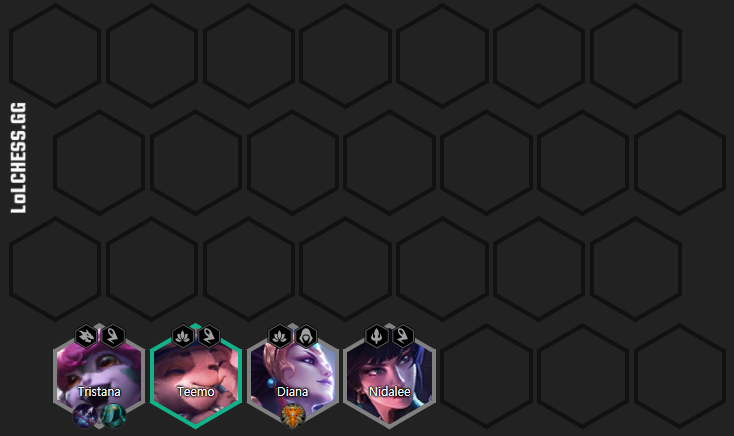 Work your way towards 4 Spirit and 4 Sharpshooters in mid-game. Your board should start to stabilize with upgraded units. Nidalee should be swapped out for Sivir if you have a Sharpshooter chosen. Pick up Teemos during this stage and try to 3 star him if it comes easily; save your gold if they don’t come quickly. Sivir provides a huge boost to this team since her ult provides even more attack speed to an already rapidfire board. 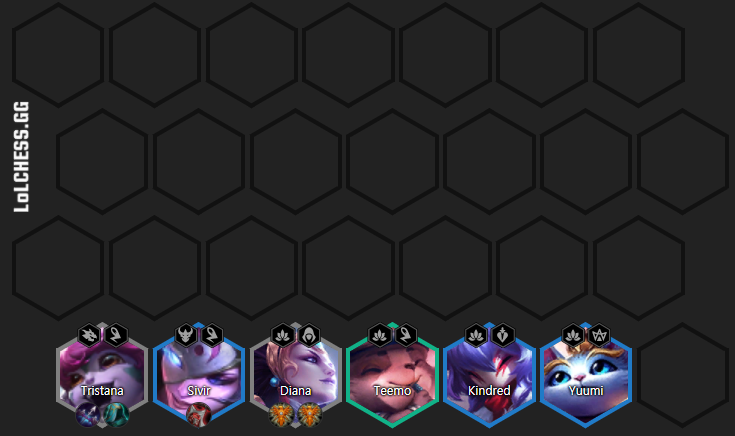 In order to survive the late game, add tankiness to your build. Shen and Yone are great options to add the Mystic  and Adept buffs. Sejuani and Aatrox are solid front line tanks and add phenomenal CC to your team. Azir and Lee Sin should also be considered, especially if a Vanguard spat falls into your lap. 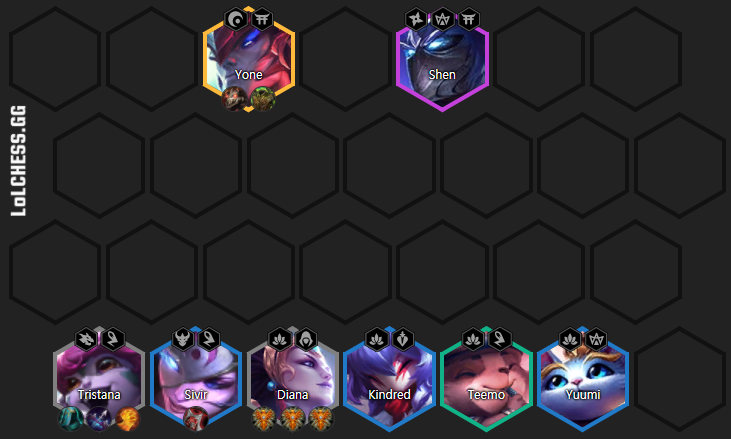 Ideally, your Tristana will have a QSS by level 8. She should be cornered as she’ll be immune to any enemy Aatrox pulls. Yone is an Exile. If an Exile has no adjacent allies at the start of combat, they gain a shield equal to 50% of their maximum life, so keep him frontlined and away from other units. Keep Diana in the middle of your back line so your squishies benefit from her lockets. Shift your backline left or right to get Diana on the enemy carry if possible, but not if it means taking locket away from your units.

If all else fails, watch some of the VODs from the Regional Qualifiers. No one plays reroll Tristana better than Agon, and he showed his skill again and again. In the end he fell short of qualifying for worlds but not for lack of talent.