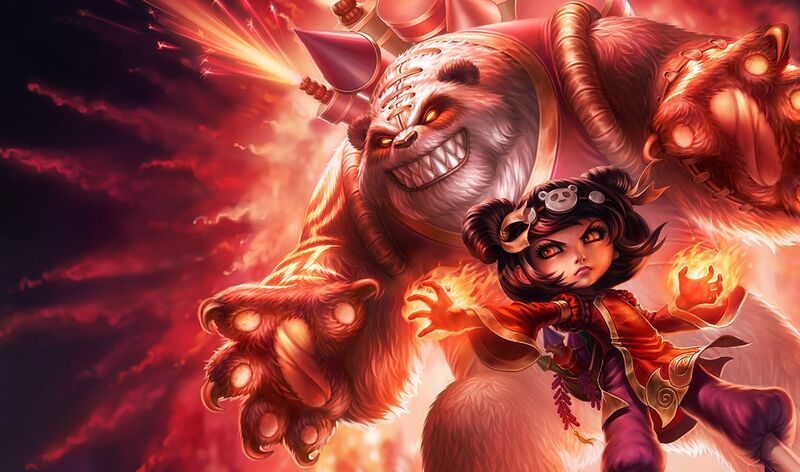 Patch 11.4 aka “Set 4.75” was released last week and Elderwood was nerfed. The change knocked the Elderwood ASol build down a peg in the meta, but fear not. A new 7 Mage build has quickly risen in it’s place and this guide will teach you the basics of the build. The two most important factors in this build are:

It’s important to understand what the Mage buff does in order to run the 7 Mage build successfully. “Mages cast twice and have increased spell power (80%/105%/135% at 3/5/7 mages). This means that the mage buff makes your tank Annie even tankier (via the shield on her cast) and your ASol pack a huge punch.

The perfect start to this build consists of an early mage chosen; Brand, Twisted Fate, and Annie are all used in the end game. A rod and a BF Sword complete the highroll early game.

First, look for TF and Brand in the early game. If you find a chosen mage TF, make sure your Gunblade goes on Brand for now. You don’t want to sell your chosen mage later in the game just to move the item to ASol. Three early game team compositions will work: 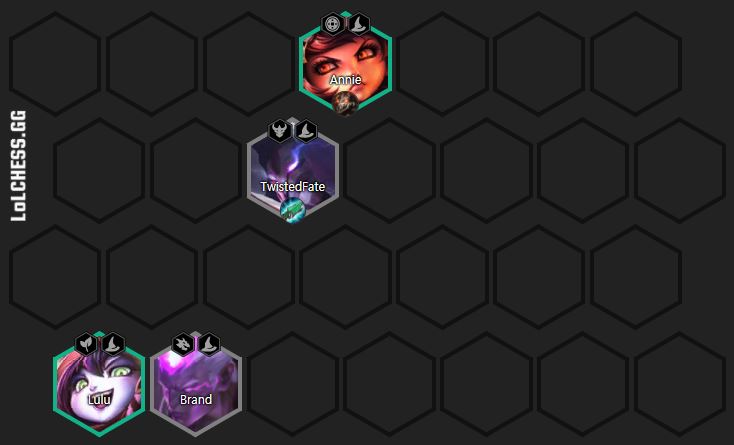 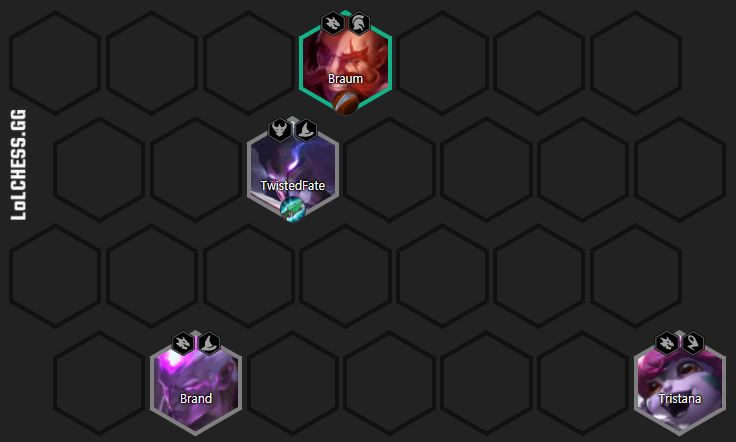 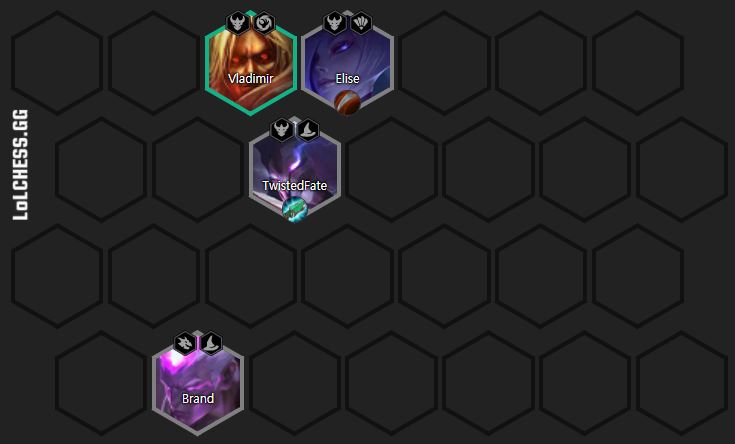 Once you reach the mid-game you should run 5 mages. Start collecting replacements to remake the champ currently holding the Gunblade, you’ll need to move it shortly. My favorite mid-game carry for this build is Darius. He excels with both Gunblade and Jeweled Gauntlet, and mid-game win-streak fortune can provide that extra boost to your econ. Moreover, Tahm Kench is easy enough to find at this stage. He will provide front line to your team and activate the Fortune trait. 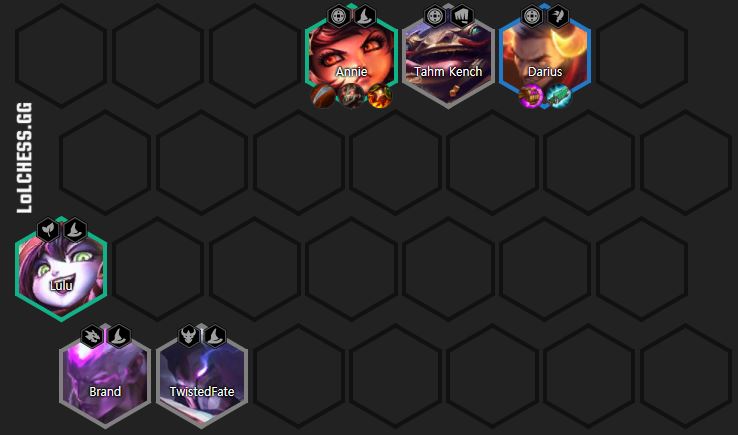 Alternatively, you can use Nunu to hold your items and run Elderwood. You can take your non-chosen TF off the board, but don’t sell him! You’ll need him later. 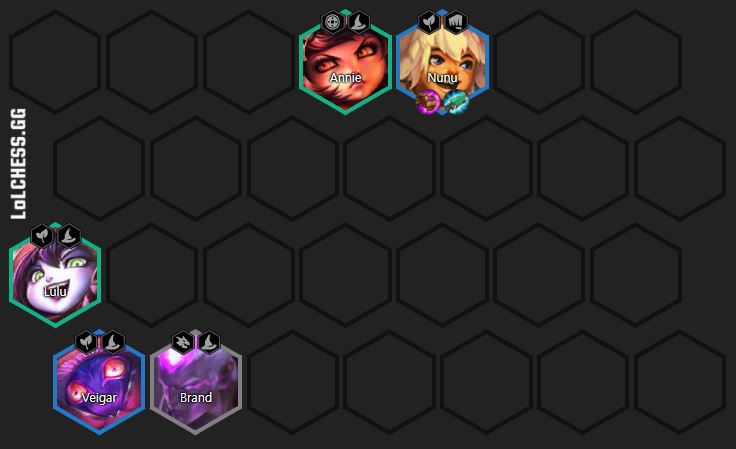 Finally you’ll add all 6 (7) mages on the board. Upgrading Annie to 3 star is helpful but not necessary. Most importantly, ASol should now hold your Gunblade and Jeweled Gauntlet. The third item he carries is flexible; Guardian Angel is helpful against assassins and Giant Slayer is necessary against Brawlers. Veigar is a great candidate to hold Chalice of Power or Zeke’s Herald and provide an extra boost to ASol. 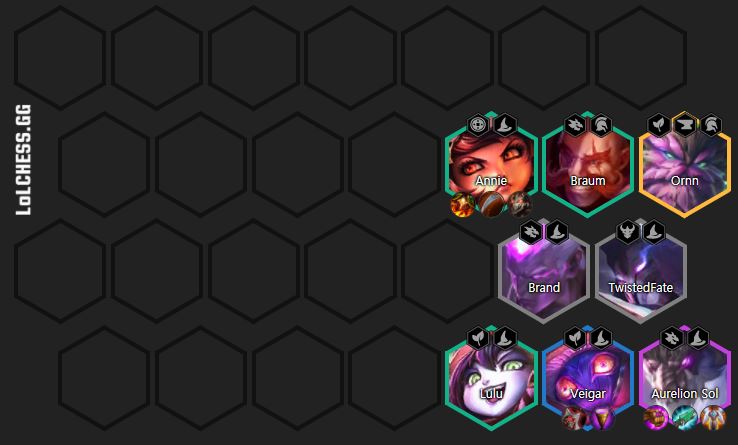 As usual, protecting your ASol is the most important consideration when positioning the 7 mage build. Putting him in either corner will keep him safe from most late game assassins and allow him to benefit from the aura items on Veigar. Consider flipping Ornn and Lulu if you’re playing against a tough assassin opponent; getting Akali stuck on your Vanguard Ornn can give your ASol plenty of time to destroy the rest of their team. I put extra late game tank items on Lulu for the same reason.

If you end up getting “Mortdogged” and can’t find a chosen mage by late in the game, you can also run chosen Dragonsoul. It’s not as strong as the 7 mage build but the extra damage from Dragonsoul will make up some of the lost firepower.